Intro & Overview:  So far this semester:
​Now … this reading—Thomas Elsaesser & Malte Hagener’s “Cinema as Door: Screen and Threshold”—takes our focus to a new medium—film, over the majority of prior readings focusing more so on visual arts, esp. painting—but connects well with our earlier themes.  Elsaesser & Hagener incorporate a post-structuralist analysis (like Lyotard and Foucault), address matters of form (Kant and Bell), emotions (Collingwood, Tolstoy, Vygotsky), and embodied experience (Pepper and Bullough), but, overall, are approaching the interpretation of film (film-itself and films) most akin to Foucault: using many diverse approaches, and letting their findings speak as much to the social factors from which film comes as they do to the specific films they discuss.

Exploring and working from interconnected topics of The Door and Screen, thus also Liminal Spaces demarcated as Thresholds and Frontiers, Elsaesser & Hagener highlight these themes at work in specific films (especially John Ford’s 1956 “The Searchers”) to open up what these symbols say about film itself and demonstrate a new many-faceted method of film interpretation and aesthetical evaluation.
​
​Before notes on our reading "Cinema as Door: Screen and Threshold," I offer a cross-disciplinarily annotated image of a door to provoke paths for thinking more deeply about doors in relation to aesthetics most generally ... : 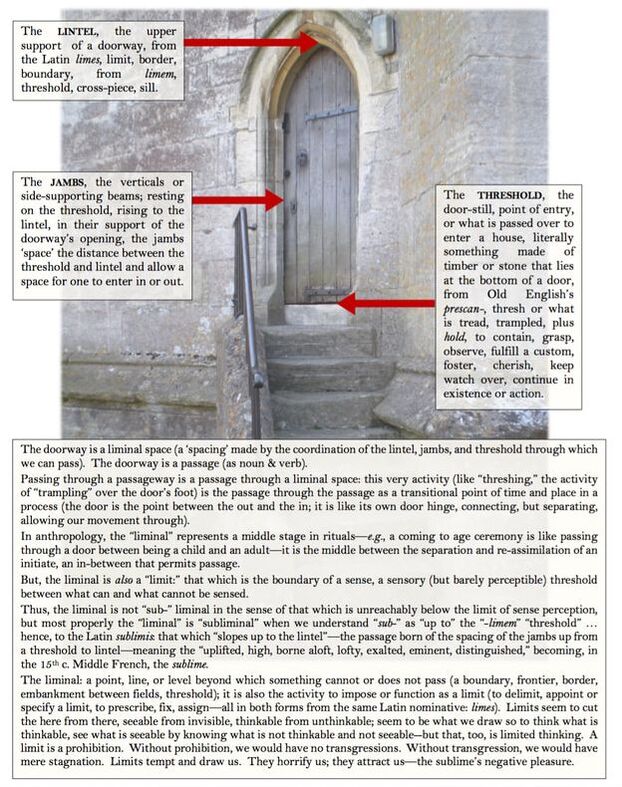 ... now ...
Thomas Elsaesser & Malte Hagener’s “Cinema as Door: Screen and Threshold,” 35-54,
​in Film Theory: An Introduction Through the Senses (pdf on Blackboard)
​ 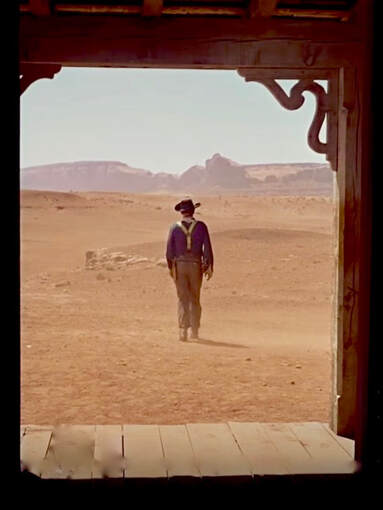 Film Still, John Ford's "The Searchers," 1956
​This chapter opens with two (paired) descriptions of scenes within John Ford’s 1956 film “The Searchers”*: from its opening, a woman exiting through a door, which opened to reveal Monument Valley, and a man leaving the wild to enter into a settler’s cabin; then, from its close, this man leaves the cabin to walk out and off into the wild west’s sunset.  In between the authors’ description of these scenes, they reveal: “The film is constructed around a series of crossings and transgressions, and it involves a constant change of places, both literally and metaphorically: it oscillates between familial and racial affiliation, between nature and culture, between wilderness and garden, between convictions and actions” (p.35).  And here we have our theme—for this chapter, for this week—introduced: the door, moreover, the threshold: “the passage from one world to another which presupposes the co-existence of two worlds, separated as well as connected by the threshold” (pp.35-36). 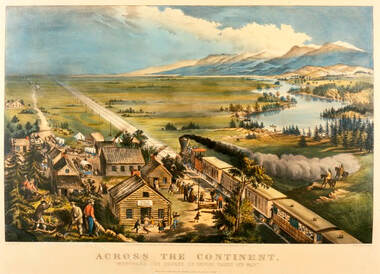 ​The Frontier: “that borderline between ‘civilized land’ and ‘the wilderness’. … This story of conquering and subjecting the vast expanses of land … the United States fashioned … its own myth of self-creation” (36).
​
“In film, this myth is based upon an underlying binary opposition of nature/culture: the garden versus the wilderness, cowboys versus Indians, but also cattle barons versus homesteaders …, the law of the gun versus the law of the book, the saloon singer versus the teacher, etc..  The Western constantly stages and affirms the frontier as a demarcation and its (necessary) transgression as the basis of US popular culture as the nation’s mythology” (36).* 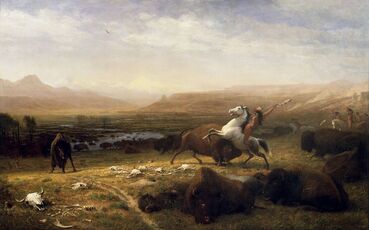 Albert Bierstadt, The Last of the Buffalo, ca. 1888, oil on canvas, Whitney Gallery of Western Art Collection
​The Chapter’s Outline:
this chapter, "Cinema as Door" ... “deals with the different ways the spectator enters into this world, physically as well as metaphorically” … themes of separation and thresholds between the film world and the real world on spatial, architectural, institutional, economic, and textual levels:
​
​(a) Introductory Remarks:  Cinema’s Real and Imaginary Thresholds  (pp.37-42):

Threshold  –connects & separates–  –is a borderline, hence comes to be from observation, by identification of a limit (that between a this & a that, a here & a there)–  –because a threshold is this limit, the line of connection & separation, every threshold hence points in two directions–  –for film, we ask: where is this limit?, where does the threshold of film lie?, where does it begin, end?–

If we conceive of cinema as entry into another world … we, spectators, find ourselves between two poles:

Morin’s insights—as well as all the positions described in this reading—“try to conceptualize a liminal situation, a not-quite-here but also a not-quite-there configuration, an in-betweenness of sorts in which film functions as a threshold and space of passage, … a ‘liminal space’” (38).​

​(b) etymology  (pp.38-39):
​
Next … from the theoretical broaching of the liminal … we move into the “real interface in the auditorium, the material border between spectator and film, … the screen” (38).

Crossing Borders:
Authors will return to “the screen” as semi-permeable membrane later (pp.53-54) … but want to add that crossing borders can be beyond the material/physical boundaries … the semantic and symbolic border-crossings can concern (39):
The significance of each of these can vary depending upon our interpretative frame.

They will begin with the most material and physical: Cinema as Material-Immaterial Architectural Ensemble (39ff):
Moreover, there is the entry into, the ‘beginning’, the ‘opening’ of a film as:  ​​
​
​(c) Narratology  (pp.41 ff.): ​
​
The authors begin the narratological analysis of film as door with reference to Gerard Genette’s theorizing on “paratexts:”

Thus, narratology … Narratology is a form of criticism and practice that analyzes narrative structure and function (how is it?, what does it do?); it “investigates, theorizes and systematizes the mechanisms and dynamics of film narration” (42) …


Mikhail Bakhtin: “maintained that any utterance—be it of a purely linguistic nature or, like verbal or filmic narrative made up of different, interwoven symbolic orders—presupposes and refers to other utterances, i.e., it simultaneously represents an offer (inviting a response) and an answer (to an implied question)” (45-46).  “Every text (in the sense of the Latin textum—‘texture’) is thus not only complex in its semiotic structures but ‘dialogical’, in that it binds, in the case of narrative, the narrator and narratee into a discursive situation of question and answer, of expectation and its fulfillment, including the suspension, frustration or subversion of such expectation and dialog” (46).
Bakhtin’s “unfinalizability”:  (the continually opening and building nature of texts that is always ongoing) also has a temporal dimension:
“The transitional or in-between spaces that earlier we described as ‘thresholds’ can in Bakhtin’s sense also be understood as moments of hesitation that invite new openings that need to be activated and performed by the spectators” (46).

Thus … “text, context and paratext function as so many passages or portals through which energies circulate that implicate the spectator and respond to his/her particular input” (46).

Thus … let us engage a Post-Structuralist narratological analysis of John Ford’s “The Searchers”:

​Authors cite a branch of post-structuralist narratology: Garrett Stewart’s conversion of film narratology into “narratography” (47).
Thierry Kuntzel, likewise, emphasizes the post-structuralist lens on film openings—a “formal analysis of classical narratives as a dynamic process, which he labels ‘the work of film’” (47).
He is addressed here for his especial note of    Doors:
“… to open or close a door, to enter or cross a space, produces specific meaning, but also acts as a punctuation mark or a shift of register …” and forms the “first, linear level of the film”; the second dimension is how the door is a passage through the mystery and leads to the original void (48).
“Emptiness or absence … in keeping, perhaps, with the psychoanalytic belief that (primordial) lack always functions as catalyst and stimulus” (48). 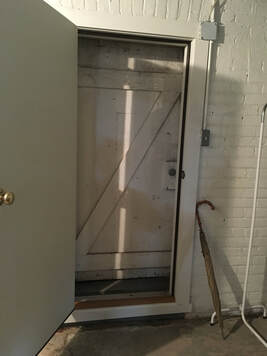 ​
​“The paradoxical motif of absence as a perpetuum mobile [perpetual motion] explicitly harks back to Sigmund Freud and his idea of dream-work …” (48).

Kuntzel’s supposition was that “the entire film is folded or condensed into the opening scenes, at once prefiguring what follows in a kind of mini-narrative, and anticipating it in condensed and encrypted form, by exploiting to the maximum the ‘polysemic’, ambiguous nature of words, such as ‘game’, of gestures of welcome or entry, and even of acts and actions, such as rescue and shelter” (48).

For Neo-Formalists: “mental and emotional engagements are a matter of carefully feeding information to the spectator or withholding it at certain points, to create suspense, fright or mystery” (49).

For Post-Structuralists: “‘film-work’ … also requires the spectator to be fully engaged, but the information s/he receives is present in often coded form that requires special interpretative keys …” (49).

A critique of Post-Structuralism often thus comes in the form of an accusation of its being outside of and superior to the work under analysis.  That it is distanced from art.  That it ‘tells’ art what it means, presuming art itself is ignorant.

More importantly is the awareness of the varying recognition of the gaps of overt and covert and unconscious meaning, and its being generative of what Paul Ricoeur called the “hermeneutics of suspicion” (49).  Narratives, e.g. films, can seem innocuous, but covertly enforce normative dictates.
The years of post-structuralist critics, and how mainstream their method and many of their ideas have become, has generally birthed a tendency we see today in critical analysis trying to “let films speak for themselves” (49)—a soundbite that is to be carefully understood as a listening that is keenly aware to the influence at once of the listener on the listening.
So … Back to   DOORS  with these insights in mind:
​So … all the films mentioned in this reading reveal shared and overlapping components of plural-meanings opened up by the many facets of doors (doors, thresholds, passages, screens) discussed herein.


“Summing up the idea of cinema as door and screen, we can say that it is a bodily concept indicating crossing or transgression: the spectator enters metaphorically ‘another world’ or experiences his/her own world as foreign and strange, while retaining an awareness of entry and transition, rather than remaining in the state of witnessing a display an exhibition and an unveiling” (54).

“This movement passage, transport and transposition, though, is relativized by the (literal as well as etymological and metaphorical) fixity and immobility of the components of the cinema” (54).


“… the door and the screen, acting as sieve and filter, draw our attention to the partial permeability of the image” (54)—awakening ideas of exchange, dialogue … film induces physical presence and spatiality while paradoxically remaining abstract, artificial, and self-enclosed.