Michel Foucault’s The Order of Things

... On the Preface ...
​
Establishing the basis of the Analysis of Pure Experience of Order ...
... this is the fundamental domain between the 'codes of culture' and the 'scientific and philosophical theories' he describes ...

So …
Foucault’s present study, “Las Meninas,” is an attempt to analyze that experience  (the ‘in between’ described above).
This attempt will seek to show:
What he is seeking throughout are the conditions of possibility
What he is doing, then, is an archeology
... Before moving into his archeological analysis,
his doing of the analysis of the experience of pure order,
a little background on the work under question ... 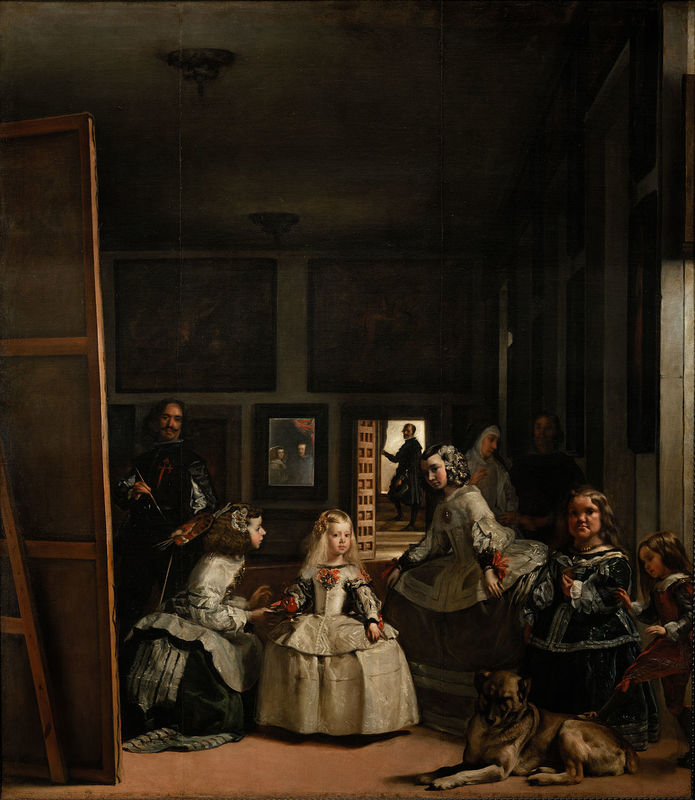 Diego Velaquez, Las Meninas [‘the ladies in waiting’] (1656, oil on canvas, 10.4’ x 9.1’, Prado
Background on the painter and about the painting … note how all of this speaks to the ‘codes of culture’ and the ‘sci/phi theories’ … think about how these/this information gives an order, and how the ‘pure’ order we are seeking is between these, hence, something other than the following …
​ 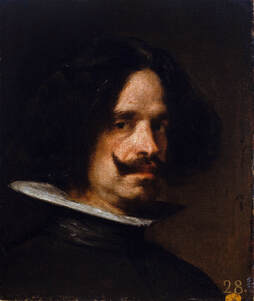 Diego Velázquez, Self Portrait, ca. 1640
On Diego Rodríguez de Silva y Veláquez (b.1599 in Seville, d.1660 in Madrid):
Spanish painter—almost always gifted with qualifications of ‘most admired,’ ‘most successful,’ ‘greatest,’ etc.—employed by the court of King Philip IV in Spain’s ‘golden age,’ Veláquez heavily engaged Baroque style, painted historical and cultural scenes as well as portraits, almost always noted as ‘miraculous,’ ‘conveying pure truth,’ ‘capturing reality,’ ‘indistinguishably life-life,’ etc..  He was influenced by Caravaggio (notably adopting his naturalism), Venetian paintings and Peter Paul Rubens (notably honing their use of perspective and mastering the rendering of nudes—the realism herein led to his notable works of court life, including dwarfs and jesters painted with such clarity they record their suffering amidst their ensuing hilarity that can continue to shock).  Around 1650, his sensational showing of a portrait of his assistant (so lifelike) led to his being granted sole permission to paint Pope Innocent X (which was then “looked upon as a miracle” and copied by all the artists of the day).  His work Las Meninas is one of his latest paintings and is considered by an overwhelming many to be his freest and most spectacular work.  After his death, since most of his works were for kings and the pope, they were not seen by many.  However, Antonio Palomino’s notable history of Spanish painters (1724) devoted a whole section to Veláquez, which established him as an unquestionable master (and his work Las Meninas as his masterpiece).  Then, when Napoleon went about his warring in the 1800’s, the work was freed and spread through Northern Europe, allowing many far and wide to see it, hence his impact has been strongest on artists stating in the 19th c.
On Las Meninas
[‘the ladies in waiting’] (1656, oil on canvas, 10.4’ x 9.1’, Prado):
​​
[2] In relation to Foucault, note: here is an account of meaning that can open up ‘cultural codes’ … it is objective, factual, yet however we fill this out, it will be in accord with our cultural conventions, e.g., it is right and common for important people to have portraits made; they are figures of royalty; etc.

[3] In relation to Foucault, note: here is an account that gets closer to a scientific/philosophical theory … close because it opens up the theoretically common features aesthetics delineates as the content for aesthetic judgment (that it is art and its value as art).

[4] In relation to Foucault, note: here is an idea hinting at why he may have chosen this piece (beyond the excessive cultural codes and philosophic theories about it!): that Velázquez himself operated within the intent to and created an object that carries underlying multiplicity of meanings from and about different fields in simultaneity.
​​
... Now ... Begin to Move into Foucault's Analysis (pp.443-54) ...

Several Key Conceptual Points in Foucault’s Analysis:
§1 (pp.443-47):
He begins with the painter (Veláquez’s self-representation within the painting, the painter partially behind the canvas, the furthest left figure).  Note the reciprocal relation between the painter’s hand and gaze—each waits for the other, what they will yield is the whole volume of the painting that remains concealed but causes the entirety of the painting we see.  This yield, however, has its “subtle system of feints”—feints being those maneuvers designed to distract or mislead, to give the impression some thing X will come to be when Y, or that nothing actually will—including his positioning (mirror-reversed, to our left, he appears at the far right of his canvas, but it is his far left to his canvas), suggesting the capture of an instant, a quick moment when he has appeared from behind his canvas, and the moment he begins to paint again, he will vanish from our sight.  Further oscillation suggested by his being partly in shadow, in light (in-between, just as his hand and gaze hover between action)—when his ‘light’ comes (his hand can make the painting come forth again), he will vanish from our sight (behind his canvas, back to work): “He rules at the threshold of those two incompatible visibilities” (443).
​“Seen or Seeing?” (444)—note the “virtual triangle” (444): the painter’s eye as the top point, to the one base point of the image we cannot see getting painted on the painter’s canvas, to the other base point of the object he is painting which is simultaneously where we stand.
​

When we stand before it—the spectators—the painter’s eyes take hold of us, force us to enter the picture “a place at once privileged and inescapable” (444), where we see our invisibility made visible to the painter and transposed into that painting he is making, which we will never see … “a marginal trap” (445) … from the ‘virtual triangle’ to the far right of the painting where “the picture is lit by a window” (445) ...

​“so that the flood of light streaming through it bathes at the same time, and with equal generosity, two neighboring spaces, overlapping but irreducible: the surface of the painting, together with the volume it represents (… the painter’s salon …), and, in front of that surface, the real volume occupied by the spectator …” (445).
​
The window brightens the room within the painting, balances it against the dark void of that canvas of which we see only ever its back … lights all the painting’s representation and the concealed image … revealing to concealing.
​
Given that the mirror duplicates—and it is central in the painting: its upper edge is the half way line of the top and bottom, its position on the wall is dead center—it seems like it should show the whole of the painting’s room … but it shows nothing that the painting shows … it shows only what the painting doesn’t show.