A Honing of the Eye: 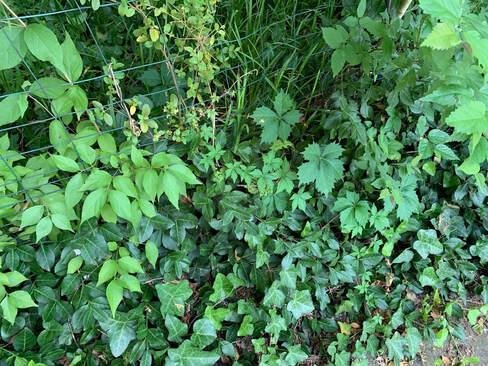 Oh, what a bloody mess!: roughly clockwise from top left: honeysuckle, privet, virginia creeper, sedge, elm, euonymous, ivy
The individual accounts, admittedly, have honed my eye to difference, increased my appreciation, and earned from me a half smile along with that exasperated sigh at their repeated future sightings ...
But such small measures aside ...

Such a sight as the chaotic corner of weeds shown here requires a strenuous visual exercise of discernment.  For the sea is not just a sea to a sailor, the desert not just a sandy expanse to the well-seasoned nomad, and as mountains vary to the experienced trekker, the jungle has to become for me not just a jungle.  In his philosophy of art, Edward Bullough proposed a mental insertion of “psychical distance” into one’s sensory field so to shift from a dulled, blocked reaction to attentive aesthetic reception.  Consider, he offered, being in a dense fog at sea: the experience is of acute unpleasantness, one productive of anxiety and direct fear as you strain to see ... but then abstract from the dangers of the lived experience and such can be revealed as a source of  intense relish and enjoyment as you “direct the attention to features ‘objectively’ constituting the phenomenon—the veil surrounding you with an opaqueness as of transparent milk … [—] and the experience may acquire, in its uncanny mingling of repose and terror, a flavour of such concentrated poignancy and delight as to contrast sharply with the blind and distempered anxiety of its other aspects.”** An ‘objective’ observation shifts the ‘subjective’ holistic reception of the event, so to come to see (like his foggy expanse) my unruly green mass more as the collective surge of life, not a thankless chore left ever undone ... consider the shelter this provides animals (even if most frequently bunnies escaping my dogs, or perches from which the squirrels can laugh at them), good-bug homes, a green screen for my compost bin ... and then shift perspective again from the assault of a harrowing mass to a radical collective of individual species ... and then I may begin to better appreciate the unique beauty of weeds.  So, draw away your twitching to-do listed mind and look freshly, look widely, look without feeling guilt, look close, bend low—though, don't get too close, the chiggers are back—and focus as if blurring oneself outside and backwardly so to re-approach the aesthetic presentation microscopically:
* Boethius, The Consolation of Philosophy, trans. Richard Green (Mineola, NY: Dover Pub., 2002), III.1--herein Lady Philosophy shifts her consolation (i.e., blistering Stoic intellectually-curative exercise) from gentle to strong medicine: it will first taste bitter, but then sweet upon digestion, for it will lead him to true happiness.
** Edward Bullough, “‘Psychical Distance’ as a Factor in Art and as an Aesthetic Principle,” 458-467, in Art and its Significance, ed. Stephen David Ross (New York: SUNY Press, 1994), 459.

“A familiar complaint one hears these days is that, for all the modern explosion of interest in gardens, an older aspect of garden appreciation has been forgotten: that of the garden’s role as a bearer of meaning.”*  Professor Cooper’s point is superb, and it is his aim in his thoroughly argued  A Philosophy of Gardens, but it bears even greater weight when we apply it to the question of ~weeds~ in one’s garden.  Is it not the meaning broadcast by a garden of weeds that most makes one shrink overladen beneath the not necessarily herbal tonnage?  The meaning emanating from weeds is critical to consider when seeking the definition of “weed.”

"What is a weed?  I have heard it said that there are sixty definitions.  For me, a weed is a plant out of place.  Or, less tolerantly, call it a foreign aggressor, which is a thing not so mild as a mere escape from cultivation, a visitor that sows itself innocently in a garden bed where you would not choose to plant it."
​
--Donald Culross Peattie, Flowering Earth (Trinity University Press, 2013).

“We habitually think of weeds as invaders, but in a precise sense they are also part of the heritage or legacy of a place, an ancestral presence, a time-biding genetic bank over which our buildings and tinkerings are just an ephemeral carapace.  I still hoick them up when they get in my way, but it’s a capricious assault, tinged with respect and often deflected by a romantic mood.”

“Weeds, those vagrant plants, those wanderers, the uninvited … they have an infinite capacity to heal the earth, to heal our bodies, and maybe just heal our souls too.”

“Look everywhere, and you will find wild plants in places so unlikely and so unfriendly to growth that you can only be amazed at the toughness and vigor of the plants that survive in the rubble, in the cluttered ‘gardens’ of their own making.”

​“Weeds are everywhere.  We may try to bend nature to our will, but on the peripheries of herbicide-drenched fields, squeezed between paving slabs and seeded into the crevices of city walls, these often disregarded plants grow and prosper.  They are the tough underclass of the plant world, bullying their way into drainage systems, poisoning meadowland, stealing essential nutrients and taking a stranglehold on plants we deem legitimate.  Yet in those far-flung places where wilderness remains we often do not bother to consider weeds at all.  And they require our attention.  Weeds exist only in relation to ourselves.”

A Selection of not-at-all-minded Weed 'Volunteers'

Some of the Bug & Wild - Life About Here:

A Collection of Online & Print Resources: