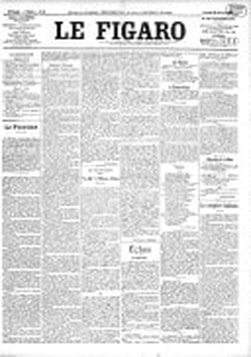 Futurism: Largely an Italian movement in the early 20th c., Futurism, as the name suggests, embraced content, styles, methods, and theories connected to contemporary, future-looking life.  Specifically, this involved a glorification of technology, speed, the new, cars, aeroplanes, industrialized cities in diverse mediums, first in literature and then including everything from painting to all forms of design, music to architecture to sculpture, film to theatre.  Its birth announcement was F. T. Marinetti’s “Le Futurisme,” published in the famous Parisian newspaper Le Figaro, and served as a rejection of the past and call to revolutionize the now, to forget about Italy’s cultural tradition and to embrace the radical modernism embodied in speed and machines.  We will read two Futurist Manifestos, from F. T. Marinetti and Umberto Boccioni; other names associated with the movement include Giacomo Balla, Carlo Carrà, Bruno Munari, Luigi Russolo, Antonio Sant-Elia, and Gino Severini.  Within painting and sculpture, futurism diversely used elements of cubist design (which they foreshadowed) and techniques to show movement. 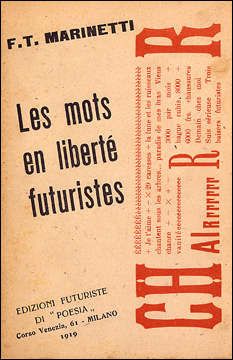 ​More about Futurism: You can see a sample of futurist film, Thaïs, by Anton Giulio Bragaglia (1916) here: 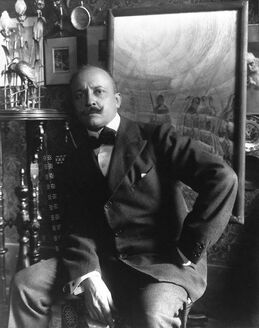 F. T. Marinetti (1876-1944)
Marinetti’s manifesto spastically flits through ideas and claims, and yet does so with beautifully poetic language—a feature we will see in all the manifestos, an impassioned voice of the wholly committed adherents.  A few key ideas to hold on to:

“Our growing need of truth is no longer satisfied with Form and Color as they have been understood hitherto” (656).


“The gesture which we would reproduce on canvas shall no longer be a fixed moment in universal dynamism.  It shall simply be the dynamic sensation itself (made eternal)” (657).
And: “Space no longer exists …” (657).


“To paint a human figure you must not paint it; you must render the whole of its surrounding atmosphere” (657).
“Who can still believe in the opacity of bodies, since our sharpened and multiplied sensitiveness has already penetrated the obscure manifestations of the medium?  Why should we forget in our creations the doubled power of our sight capable of giving results analogous to those of the X-rays?” (657).


“The construction of pictures has hitherto been foolishly traditional.  Painters have shown us the objects and people placed before us.  We shall henceforward put the spectator in the center of the picture” (657).
​
“We would at any price re-enter into life” (657).


“Our renovated consciousness does not permit us to look upon man as the center of universal life.  The suffering of man is of the same interest to us as the suffering of an electric lamp, which, with spasmodic starts, shrieks out the most heart-rendering expressions of color” (658).


“In order to conceive and understand the novel beauties of a Futurist picture, the soul must be purified (become again pure); the eye must be freed from its veil of atavism and culture, so that it may at last look upon Nature and not upon the museum as the one and only standard” (658).

“How is it possible to still see the human face pink, now that our life, redoubled by noctambulism, has multiplied our perceptions as colorists?” (658).


“The time has passed for our sensations in painting to be whispered.  We wish them in the future to sing and re-echo upon our canvases in deafening and triumphant flourishes” (658).


“Our art will probably be accused of tormented and decadent cerebralism.  But we shall merely answer that we are, on the contrary, the primitives of a new sensitiveness, multiplied hundredfold, and that our art is intoxicated with spontaneity and power” (658). 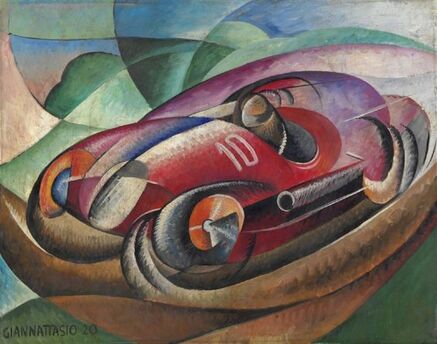 Ugo Giannattasio, "Untitled," 1920
​Their Declarations (in essence):
Their Rejections (in essence):
They end upon the clarification of the last rejection—no nudes: this is not due to viewing them as immoral, but just as having become monotonous; hence, they command the suppression of all nudes in painting for ten years. 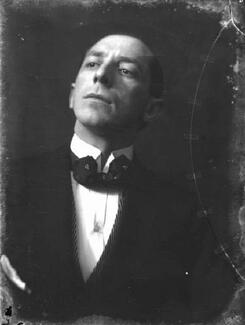 Umberto Boccioni (1882-1916)
Boccioni, like Marinetti, is writing his manifesto from within the school of Futurism; many of the principles that the latter proposes are taken up and applied to sculpture by Boccioni.

The first real similarity is the rejection of traditional principles, methods, and subjects: “sculpture offers a spectacle of such barbarism, clumsiness, and  monotonous imitation, that my Futurist eye recoils from it with profound disgust!” (661).  Like Marinetti, Boccioni rejects imitation in favor of new creative originality, rejects an adherence to past models, and rejects especially the limitation of only carving new old-looking nudes (“the artist copies the nude and studies classical statuary with the simpleminded conviction that he can find a style corresponding to modern sensibility without relinquishing the traditional concept of sculptural form” (661-2)).

Boccioni berates his contemporary sculptors for not innovating, like the work he sees in painting and poetry (“Sculptors must convince themselves of this absolute truth: to continue to construct and want to create with Egyptian, Greek, or Michelangelesque elements, is like wanting to draw water from a dry well with a bottomless bucket” (662)).
He then introduces the first of three new futurist concepts to guide this new sculpture:

Interpretation of Planes: a plane will be any surface, any spread of space rendered as representational of a thing; the interpretation of these planes will be the relationships and interactions between things.  He sees this development in Futurist painting’s “study of landscape and the environment, which are made to react simultaneously in relationship to the human figures or objects …” (662).  This is a theoretically rich idea—it is a rethinking of subject-object relationships. ​​
Apparent Plastic Infinite and Internal Plastic Infinite:  (“plastic,” from the Greek plassein, “to mold,” is that which is moldable, what offers a scope for creativity; those arts differentiated from the literary and musical, that which is made of something.)  What exactly Boccioni means here is vague, but we can get a sense of it by quoting the full context in which these terms appear:

“We have to start from the central nucleus of the object that we want to create, in order to discover the new laws, that is, the new forms, that link it invisibly but mathematically to the apparent plastic infinite and to the internal plastic infinite.  The new plastic art will, then, be a translation into plaster, bronze, glass, wood, and any other material, of those atmospheric planes that link and intersect things” (662).

The apparent and internal plastic infinites, presumably the given/presented possibilities and the essential/inner possibilities for the molded thing, guide and/or frame the creation of the thing-created; these infinite possibilities are the linkages/intersections that are formative of the atmospheric whole or totality of the sculptural work (the plastic work).

Physical Transcendentalism:  The above quote is the expression of what he calls physical transcendentalism—presumably, the plastic work, the sculpture, is something and embodies the transcendence of the static to embrace the atmospheric linkage or intersection of planes.

Boccioni then moves to two attempts that have been made in contemporary sculpture to capture modernity and four sculptors that come close to or miss the mark to which he wants sculpture to go.

The attempts:​
The Sculptors:
So, while Rosso comes the closest to what Boccioni is advocating for Futurist sculpture, he does not go far enough.  What he (and all sculptors) needs to do is search for the “Style of the Movement,” “that is, by making systematic and definitive in a synthesis what Impressionism has given us as fragmentary, accidental, and thus analytical.  And this systematization of the vibrations of sculpture, whose foundation will be architectural, not only in the construction of the masses, but in such a way that the block of the sculpture will contain within itself the architectural elements of the sculptural environment in which the subject lives” (664).
The result will show the total environment, the atmosphere, of the subject; it will be mathematical and geometrical, it will reinvent harmony and redesign form.  “Traditionally a statue is carved out or delineated against the atmospheric environment in which it is exhibited.  Futurist painting has overcome this conception of the rhythmic continuity of the lines in a human figure and of the figure’s isolation from its background and its invisible involving space” (664).  Thus, Boccioni calls us to get rid of definite lines and closed sculpture, to break open figures, to enclose sculpture in environment, to let the whole world fall in on and merge with us, to have harmony match infinite creative imagination, to not imitate tradition, to use transparent planes, to innovate intuitive coloration, to make static lines dynamic and forceful, to use the straight line in an alive and palpitating way, to capture infinite expression of the material, to lay bare fundamental severity of modern machinery, and to, thus, achieve reality by going beyond the bounds of art (664-5).

He ends his manifesto with nine conclusions (in essence):
Selection of Boccioni's Sculptures: 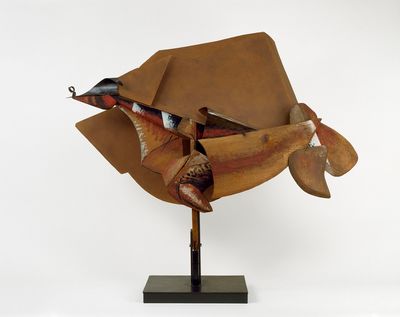 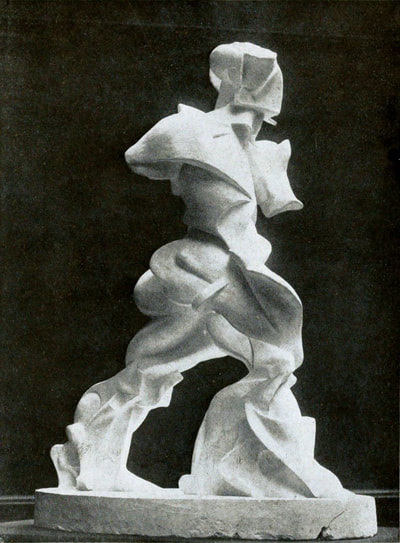 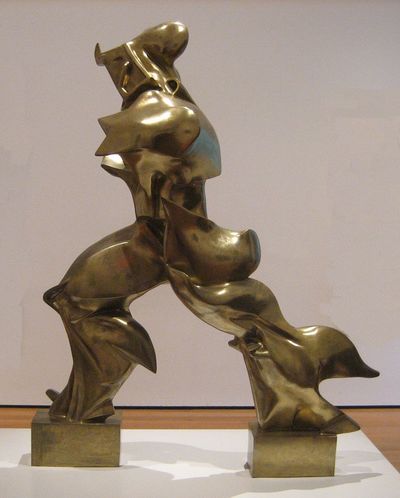 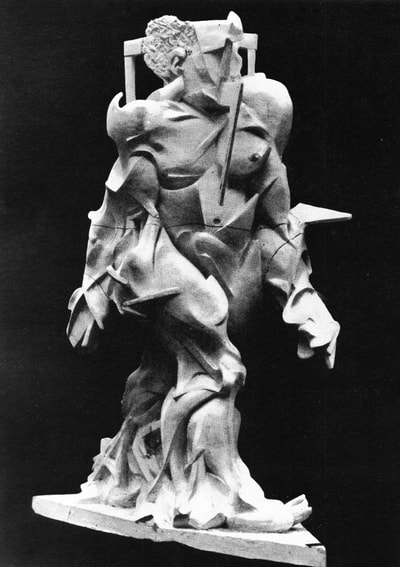