Leo Tolstoy
What is Art? 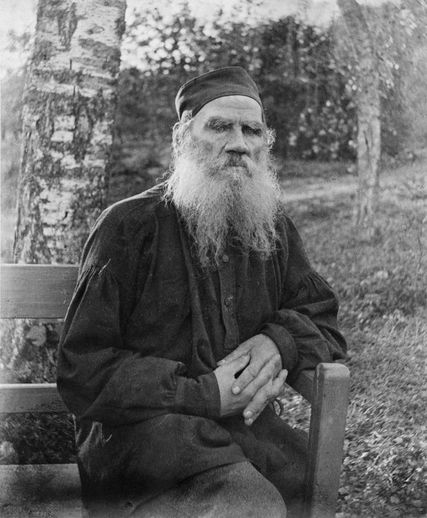 Leo Tolstoy, in 1897
The Russian Count Lev Nikolayevich Tolstoy (1828-1910) is primarily known as a writer of novels, stories, plays, and essays, although forged important theoretical paths in ethics (theoretically anarchist, socially pacifist), aesthetics, educational reform, and religious interpretation.  He was born into a notable, noble family, but his parents died when he was young, and he was raised by relatives (along with his four siblings).  Initially a bad student (although later learning over a dozen languages and becoming a famous writer), he left University early and spent time living the heavy gambling life before joining the army in 1851 (first in Caucasus and then fighting in the Crimean War), about the time he began writing.  In 1855 he left the army and in the late 1850’s, he became committed to an ascetic, non-violent political program.  He is considered one the greatest Russian writers, with his most notable works being War and Peace and Anna Karenina, which embody his spiritual, political, and ethical radicalism.  Falling in love in the 1860’s, he married Sophia Andreevna Behrs (Sonya) in 1862 and they had 13 children.  Thereafter, he committed himself to his writing, although also travelled Europe, witnessing political unrest firsthand and meeting notable influences from Victor Hugo to Pierre-Joseph Proudhon (the French anarchist).  Other strong influences on his thought include Arthur Schopenhauer’s aesthetics and ascetic ethics, Mahatmas Gandhi’s Satyagraha (non-violent civil disobedience), and Henry George’s economic theory.  He suffered an existential crisis in the late 1870’s, becoming depressed and suicidal; after this, his political radicalism heightened and his writings further embodied intense political and religious critiques.  He was excommunicated from the Russian Orthodox Church, although his later years witnessed an intense, albeit radical, embrace of the teachings of Jesus (his The Kingdom of God is Within You, of 1893, reread the Bible as centered upon the idea of loving one’s neighbor and turning the other cheek).

Two points to note, reflect upon, from the  anthology's introduction:
Tolstoy’s “What is Art?” is a clear, concise expression of how art must be an expression of an artist’s emotion that is clearly communicated to recipients who then become “infected” by the affect so as to thereby experience for their selves that same emotion.*
“The activity of art is based on the fact that a man
receiving through his sense of hearing or sight
another man’s expression of feeling,
is capable of experiencing the emotion which moved the man who expressed it” (178).

Tolstoy offers numerous examples of the transmission, for example, a person laughing makes those around him/her feel merry themselves.  The capacity we have for receiving this transferred emotion, perhaps something like empathy, is the ground upon which the activity of art is based.

Tolstoy continues by explaining how art begins and its aim.  The object or aim of art is in “joining another or others to himself in one and the same feeling …” (178).  It begins, then, by the artist’s external expression of his/her emotion.  This expression, as Tolstoy offers through an example of a boy’s encounter with a wolf, can be done by relating the encounter: he “describes himself, his condition before the encounter, the surroundings, the wood, his own light-headedness, and then the wolf’s appearance, its movements, the distance between himself and the wolf, and so forth” (179).  This recounting of the experience, the narrative chronicle, engages the artist in a re-experience of the event—s/he goes through it (affectively) again in its telling (this re-experience is as important as the experience aroused in another for the judgment of X to be art).  Of course, while this example may be the written or told art form, the method can be mimicked in two-dimensional art, three-dimensional art, film, music, dance, etc.

There is an important question here, however, as to how much the narrative is required.  It is clear that Tolstoy’s theory is based in the idea that art is communication, that it is communicative.  But, is there a tension between communication as a narrative transmission and Tolstoy’s greater emphasis that the communication is the creation of a contagion of affective experience.  After being exposed to the art, are we to know something, or simply feel something.  His theory suggests the latter, but his description of the method suggests the former.*  Tolstoy does, twice, issue that the decision whether something is art and its quality is made “apart from its subject-matter” (180, 181)--thus, it seems that rational sense is less at stake than the conveyance of affective sense.
An additional important note about the ‘how’ of art is that the artist need not have experienced something in reality, but can invent an encounter, so long as the invention transmits real emotion.  “Even if the boy had not seen a wolf but had frequently been afraid of one, and if, wishing to evoke in others the fear that he had felt, he invented an encounter with a wolf and recounted it so as to make his hearers share the feelings he experience when he feared the wolf, that also would be art” (179).  This is important to connect to his later requirement about the sincerity of the artist (cf., p.180).  It is worthy of consideration as to whether we can expand and/or loosen this theory up a little bit to propose whether the artist may not just have a fear of a specific thing, and then invents the story about that thing, but, rather, if s/he may invent a story inspiration of the emotion in general.  For example, the boy need not have “frequently been afraid” of a wolf, but had experienced deep fear, perhaps of the dark, of a violent fight, of spiders, of the unknown, or whatever else completely unconnected to wolves, and yet invents the story of the wolf so as to arouse a similar fear in others.  That is, how literal and direct must the object of the work be?  Tolstoy’s later comment about judging “the quality of every work of art considered apart from its subject matter” suggests that this may be a legitimate expansion (180), although his requirement about art being “individual” may work against this expansion (180).

Moving now to consider the feelings being communicated, Tolstoy explains that they are many and diverse (patriotism, devotion, religious, love, courage, merriment, etc.), and can be “very strong or very weak, very important or very significant, very bad or very good …” (179).  There are many questions that must be explored concerning these feelings, cf. below for more on this point.

Tolstoy sums up his theory in the two italicized paragraphs on p.179:
To evoke in oneself a feeling one has once experience and, having evoked it in oneself then by means of movements, lines, colours, sounds, or forms expressed in words, so to transmit that feeling that others experience the same feeling—this is the activity of art.
Art is a human activity consisting in this, that one man consciously, by means of certain external signs, hands on to others feelings he has lived through, and that others are infected by these feelings and also experiences them …. (p.179).

Note, here, that art, then, is restricted to being a conscious human enterprise—the grand canyon or chirping of a bog full of frogs cannot be art; paintings done by gorillas or cats cannot be art; an assemblage of objects done accidentally by a person cannot be art.

Tolstoy then moves to a consideration of judging excellence in art.  This is done by determining the “degree of infectiousness” of art (179).  “The stronger the infection the better is the art …” (179).  The subject matter itself is not to be considered—so, if it is a painting of a teacup full of kittens or a battlefield, a composition performed with kazoos or violins, such things are irrelevant.

There are three conditions for this degree of infectiousness, although Tolstoy also argues that they can be reduced to the most important, third condition:


​Tolstoy (the good Russian) considers “peasant art” to always be the most sincere form of art, and acts most strongly upon us; in contrast, “upper-class art,” which is the prevailing norm, is the least sincere and has the weakest affective power over us.
All three of these conditions must be met for something to be art.  The degree of these conditions is that by which we judge the excellence of the work.

... See below the images for a list of questions to consider on Tolstoy's aesthetic theory ... 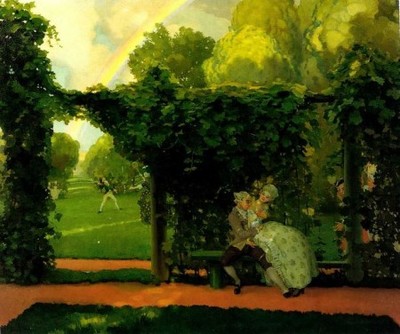 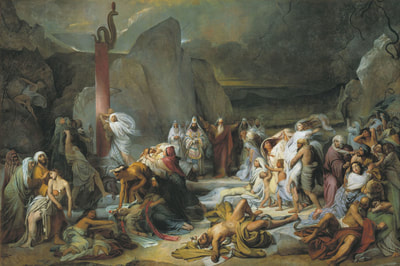 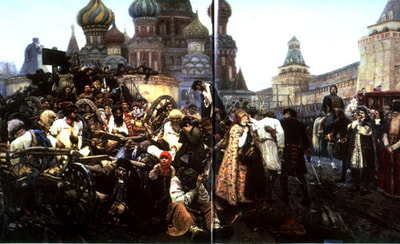 Vasily Surikov, The Morning of the Execution of the Streltsy, 1881 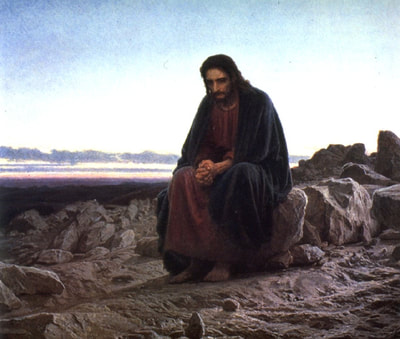